I missed sending the last briefing of the year to this list. You can find it here. Some fun stuff on evolving logos, the relationship between attractiveness and IQ in professors, and the latest improvements in GPT-3. Sorry about that. The end of the year was a little nuts for my family. I will try and do better.

In the next couple of weeks I expect to write essays instead of briefings. I may experiment with dropping the essays here as well. Stay tuned.

Also check out this week’s sponsor. Adam Davidson was the creator of Planet Money. He is kicking off a virtual course on Storytelling at the end of the month and providing a discount to Startu.curated readers. I will also be doing an interview with Adam in the coming weeks, subscribe at Marketing BS if you are interested (both text and audio). 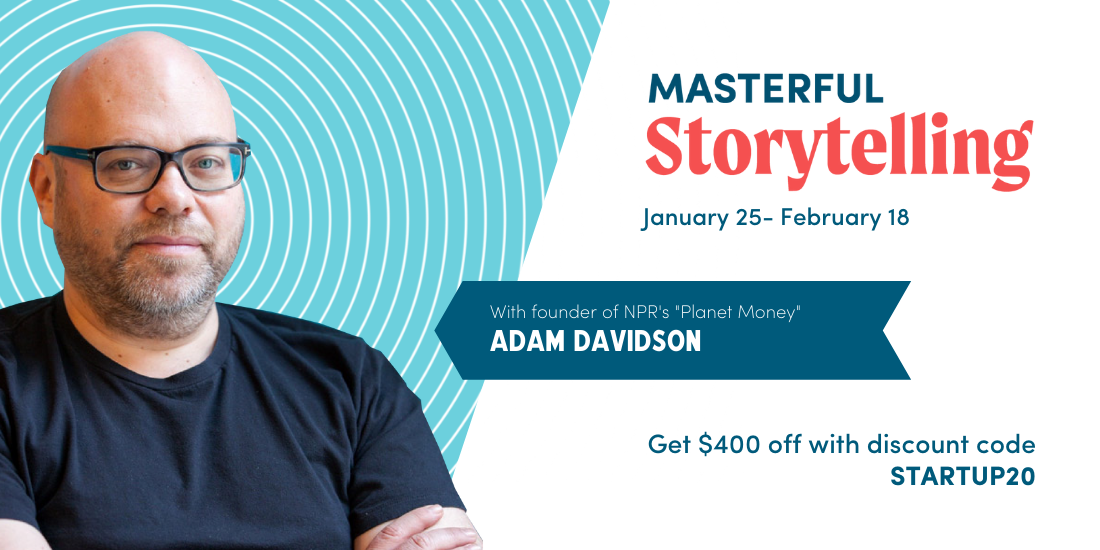 Are you trying to raise capital faster, impress customers, attract the right opportunities, or land your dream job? You already know that great storytelling is a superpower. Enroll in Masterful Storytelling and learn a clear, immediately usable framework for telling your story well. In this 4-week live online course, founder of NPR’s Planet Money Adam Davidson teaches you how to perfect your pitch and connect with any audience.

Adam is offering Marketing BS and Startup.Curated subscribers $400 off admission when you enter the code STARTUP20 at checkout. The next cohort starts on 1/25 and spots are limited, so be sure to secure your seat!

Target Audience of One: When the purchase decision for your product relies on a high ranking executive decision maker you generally need to focus on sales over marketing. The challenge is these executive decision makers are hard to reach. They have gatekeepers (like assistants) whose job it is (among other things) is to keep them protected from your sales people. So marketing’s job is to try and get in front of these key decision makers so that they reach out to sales on their own, or at least become more likely to take the sales call. One technique in these situations is “Account Based Marketing” - you effectively advertise to anyone working at the target company (for example by running ads targeting the IP address of the organization). During the Trump administration there were stories about companies running ads on Fox News morning shows that the president was know to watch. Now Politico has a story that companies trying to influence the current president are advertising in a local Delaware newspaper that he apparently reads. I expect there could be some high ROI here, especially if it could be scaled to target other leaders in the executive branch. How long until “Political ABM” becomes a thing? Related: How presidential speeches are used as a marketing tool for government employees.

NPS: NPS is calculated by asking customers “how likely are you to recommend this product to a friend”, and adding the “promoters” (9s and 10s) and subtracting the detractors (<7s). Lots of companies use NPS to claim they are loved by their customers, but the score does not have much (if any) rigor behind it. There are many problems with NPS - not least of which is that you can’t trust what people say - only what they do. “Kieran” a new writer on Substack argues in his first post that not only does NPS “not say very much” about a business, but it also has an “unreasonable amount of variance”. The variance means that you can’t use it as a bellwether “early indicator” of how your business is doing, because their is too much noise. It also means that if you measure it enough times you will eventually get a high score. That is the score you can use when you pitch your business to investors. So maybe it has a purpose afterall?

Personalization: I wrote about McDonald’s $300MM acquisition of “Dynamic Yield” in 2019. The idea was to give users personalized recommendation during purchases (i.e., “Do you want [Onion Rings] with that?” where fill in the blank for onion rings). I thought it was a terrible idea at the time, and it seems like it only took them two years to recognize that internally (likely the turn-over of whichever executive sponsored the acquisition). They are selling it to Mastercard for an “undisclosed sum”

Geographic A/B testing: It is hard to measure impact from top of funnel marketing channels. The best way I know how to do it is to run programs in some geographies and not in others. Measured has a blog post about how to actually pull something like that off (it is harder than it looks)

Case Studies: HBR has an essay by the dean of HBS that asks the question “what do case studies actually teach?”. His answer is very reasonable. He writes that they teach “meta skills” like “preparation”, “discernment” and “bias recognition”. My concern with case studies is not that they teach these skills. My concern is that many people who read case studies generally do not THINK they are learning meta skills - they think the case study is about learning specific lessons from that particular example. On that, case studies are very over-rated (I once got into a Twitter spat with Tom Peters on this point)

Anti-Amazon: Whenever a company gets big everyone seems to worry that they will dominate forever. The example is always, “how could anyone build [Facebook] when [Facebook] has these big intrenched advantages”. The answer is that the way to beat Facebook is not to build Facebook. Instead you build Snapchat or Clubhouse or TikTok. Amazon dominates eCommerce, but more and more people are realizing they can be beaten - just not directly. The Guardian has a piece on Shein and how it is winning in its ecommerce category (it is 28% of all fast fashion sales in America now growing at 200%+). Meanwhile Brad Stone in Bloomberg argues Shopify is winning by being the “anti-Bezos”. Related: Why Clubhouse is NOT doing so well.

Negative Reviews: A good WSJ essay from 2011 on Jeff Bezo’s early years. Talks about why the site allowed negative reviews when everyone told them it was a terrible idea. Negative reviews hurt your short term conversion rate. But they increase your lifetime value. Another example of how the right answer is ignoring the short term metrics. Bezos did a lot of this and it is an important reason Amazon is as successful as it has been.

Big Bets: Alice Newton Rex has a new Substack about “Big Bets”. She speaks to the product owners who led big internal product initiatives at companies. Here is her write-up on Microsoft’s voice bet “Contana”

Click and Collect: Walmart now has 25% market share in the US on “click and collect” (i.e., order online, pick up at a store). Important because it is the most profitable retail channel. Do not expect anti-trust action, because market share is not what it is about these days.

Jeffrey L Bewkes (Chief Executive of Time Warner, 2010): “It’s a little bit like, is the Albanian army going to take over the world? I don’t think so.” [With respect to the risk from Netflix. I wonder if there is a team room in the Netflix HQ named “Albanian army”]

“Zero Fucks Given”: Translation into 22 other languages. Some personal favorites, “It’s sausage to me”, “It can oxidize on my anus”, “Narrate that to a tortoise”, and “It hurts me in the lighthouse”.