This briefing went out last week to Marketing BS, but I had some challenges getting it uploaded here. But most of the links are relatively evergreen, so I think it is still worth sharing.

Some more follow-up to my Metaverse essay (Essay. Previous Follow-up):

Oculus: Given how much I have been diving into this space, I decided it was time to experience it. I bought a couple of Oculus Quest 2’s and have been playing around. It is far better and more immersive than I expected. If any readers have one and want to throw a virtual frisbee around in simulated zero-g, let me know!

Apple AR: Rumors are that Apple will launch their AR device in Q4 2022. It’s coming fast.

Iceland: If you have not seen Iceland’s Tourism Board’s parody of the Meta presentation, do yourself a favor and watch it now. (Still not as good as Wes Anderson’s directs the X-men I shared last briefing, but what is really?)

Call to Cancel: The FTC has said they are going after media companies that allow subscription wit a click, but require calling to cancel. This is churn-reduction 101, but a terrible user experience. At this point most tech companies do NOT do this anymore. The big offenders are the major newspapers. Ironic that these are the papers that complain about the conversion-rate-optimization “tricks” that tech companies use. Their complaints are going to come back to bite them.

Reddit Radicalization: Nature looked at the increased radicalization of Reddit over time and found that individual users were not becoming more radical, rather more radical users increasingly joining the platform over time. In the marketing section because it shows just how hard it is to “change” someone - more effective is user acquisition.

Tesco: Tesco’s advertising (“media and insights”) platform is live. The power of these things are [purchase data tied to individuals] + [media inventory] + [self serve platform]. Tesco has #1 and (mostly #2). Still missing #3 to get to real scale.

Effective Ads: You can log into TikTok’s Creative Center and, by filtering by reach, you can get a pretty good idea of the top performing video ads are at any given time. You can even filter by industry, campaign objective and region. Powerful tool even if you aren’t advertising on TikTok. Thesis did a little analysis of the trends they are seeing with the tool.

Conformity: A paper in Nature finds that if you are told other people are “inclusive” you become more inclusive. If you want people to be less racist, DON’T tell them that everyone is racist. Tell them everyone else is NOT racist. This is consistent with other similar findings. Also why beer commercials work. Related: People think that products will be more effective for others than themselves.

Walmart: The retailer is getting into live shopping events. Content gets eye-balls but does not monetize well. eCommerce monetizes but needs eyeballs. More and more we are seeing the merger of the two. Sometimes that means a merger, but sometimes it is an organic build like this one.

Tax Arbitrage: A common refrain here at Marketing BS is that Loyalty Programs are not about Loyalty. One thing they are about is “kickbacks”. Many people travel for business. The company pays for the flight and hotel, but the individual gets points they can use for personal travel (and the points are tax-free). The government has always looked the other way on these kick-backs, but last year American Express salespeople started telling their clients the tax arbitrage opportunities directly and in writing. The IRS did not take too kindly to that. Sometimes too much legibility is not good for you. Oops. I don’t see it affecting most programs, at least for now.

AI landscapes: Nvidia has launched a beta version of “Canvas” which lets non-artists create landscapes, that the software makes photo-realistic. We will see more and more AI like this. It doesn’t replace humans, it augments them. And in so doing the skills needed to create will shift more and more from direct creation, to understanding how to create with computers.

Bullying: Meta has a post on how they use AI to detect bullying. Note that this is a really hard problem. Calling a stranger a “moron” is likely trolling. Calling an acquaintance a moron is likely bullying. Calling a close friend a moron may be a sign of affection. Context matters…

Whales: Hakai magazine has a feature on how scientists are working on decoding the language of whales. First step is using a tool similar to GPT-3, which just predicts the “next whale sound” based on the sounds that came before. The initial focus is on sperm whales who speak to each other with clicks (it is easier to train the AI on discreet clicks rather than the more melodic sounds other whales use). What is interesting is that we (or rather the AI) may be able to communicate with whales before we know what it is we are communicating. For the whales it will be like they are having a conversation with GPT-3, but no one will be on the other end.

Zillow: Lots has been written about Zillow’s exit from home buying, but I found this piece the most interesting. It claims that the algorithms Zillow was using actually worked pretty well, but that management over-rid the computers when they did not give the result they were looking for. Then everything blew up.

Professional Whistleblowing: Politico has a good piece on what happened behind the scenes with Frances Haugen’s whistleblowing action against Facebook. Everything becomes more professional over time…

Apple Advertising: Business Insider ($) does a dive and some case studies (Bumble and Farfetch) on the impact of Apple’s changes on advertisers.

Spying on Students: GoGuardian is an AI spyware tool that is focused on schools. These tools track the students’ computers and triggers alerts based on behavior the AI thinks needs to be actioned (example given: searching for “sexy girls” in Google). Expectation of privacy in school is lower than just about everywhere else, so it makes sense “full monitoring” will be experimented here first and most intensely. 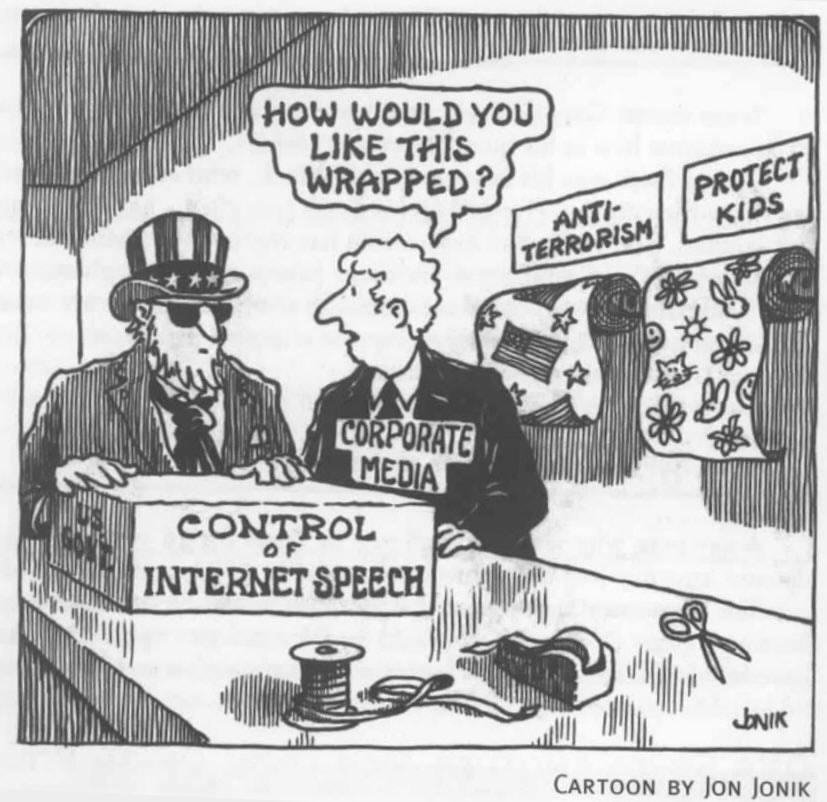 CFA Tests: Is working at home better or worse for productivity? Most of the time is really hard to know because measuring productivity is hard. Here is a new data point: CFA test pass rate has been coming down through the pandemic and hit an all time low in September of 39% (vs. ten year pass rate of 53%). It suggests at least studying from home is not good for your productivity.

Forced Entrepreneurship: A new study looks at what happens to college grads during recessions. Many that would have become consultant or bankers are “forced” into entrepreneurship. These incremental entrepreneurs tend to OUTPERFORM the students who would normally become entrepreneurs. The inference is that very talented people - who WOULD BE great entrepreneurs - choose conventional paths when they have the choice. Matches my theory that talented people tend to be talented in a wide variety of areas and “personality type” matter less than most people think.

Colorado Salary Ranges: The state passed a law last year requiring all job postings give salary ranges. IT led to many companies offering remote roles anywhere EXCEPT CO. But some companies did allow applicants from CO, and so listed the ranges as required. The WSJ scraped the listings and shared the findings.

Amenities: Another new paper. this one finds that workplace amenities like more vacation, free lunches and better healthcare are correlated with traditional wages. Basically, the firms that pay well ALSO give great amenities, and the firms that pay poorly give poor amenities. It has long been clear that cross-firm inequality has been a bigger driver of inequality than intra-firm inequality. This suggests that cross-firm inequality is even higher than it appears. Go work for a high paying firm - they will also pay for your lunch! (NOTE: These studies miss the opportunities from equity. My bet is that high equity opportunities may be lower in both wages and amenities - so their is a second option).

Princess Leia: The original auditions for the part. Harrison Ford reading for Han Solo. Carrie Fisher is at the end.

The Future of Tech: Every year Benedict Evans creates a big presentation on trends in the tech industry. It is always worth reading.

Late Homework: Sometime around 1230 AD a boy in present day Russia named Onfim did some homework on soft birch bark. It was preserved in clay, and is available for grading today. He he is practicing his spelling (and doodling in the margins): 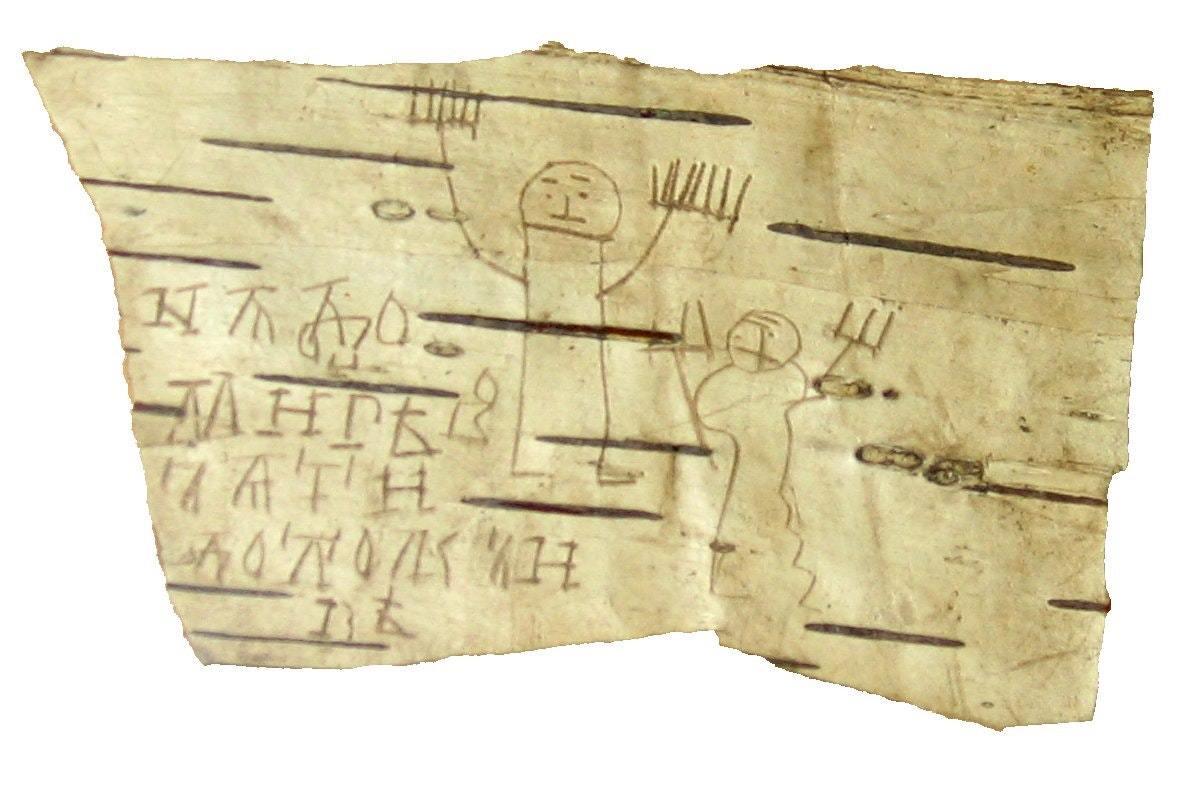