Last week I published an essay on Facebook’s re-brand to Meta: “Meta is For Employees”. I argued that most people are missing the real impact this is likely to have – reversing Facebook’s challenges in attracting and retaining talent. I am proud of the essay, so if you have not read it yet I recommend checking it out. A lot of this briefing is follow-up from that essay.

Meta.com: The domain name redirects to https://about.facebook.com/meta. But the history of the domain is interesting. Meta (the company) was founded by Sam and Amy Molyneux as a for-profit, venture-backed, company that used AI to help with scientific research (i.e., a better search engine for scientific papers optimized to find the most important research rather than the best SEO optimized papers). In my conversations with some people familiar with the space their take was that it never worked very well and seemed impossible to monetize. Cut to 2017 and Meta was acquired by the Chan-Zuckerburg Foundation and the Meta product began being distributed for free (more from the Meta founder here). It is unclear if part of the reason for the acquisition was to get Mark the domain name he needed four years later, or whether when Mark decided to re-brand Facebook they looked at the domain assets under their control and had that influence their decision. (You can find the old Meta pages through the far back machine)

Oculus→Meta: As part of the brand change to Meta, all of Facebook’s VR work is being collected into the new division. Facebook acquired Oculus in 2014, and has been the brand FAcebook has been using for their consumer VR products. Going forward the Oculus name will be dropped in favor of “Meta”. Unlike the corporate name brand change, this re-brand does not have a high production value video or CEO interviews. Instead it was announced in a Facebook post by Andrew Bozworth...

Meta Interviews: More interviews have been dropped with Mark. Matthew Ball was leading the charge on the Multiverse for years (and runs the index fund $Meta). He interviewed Zuck shortly after my post last week.

Meta Brand: People don’t like the name or the rebranding. 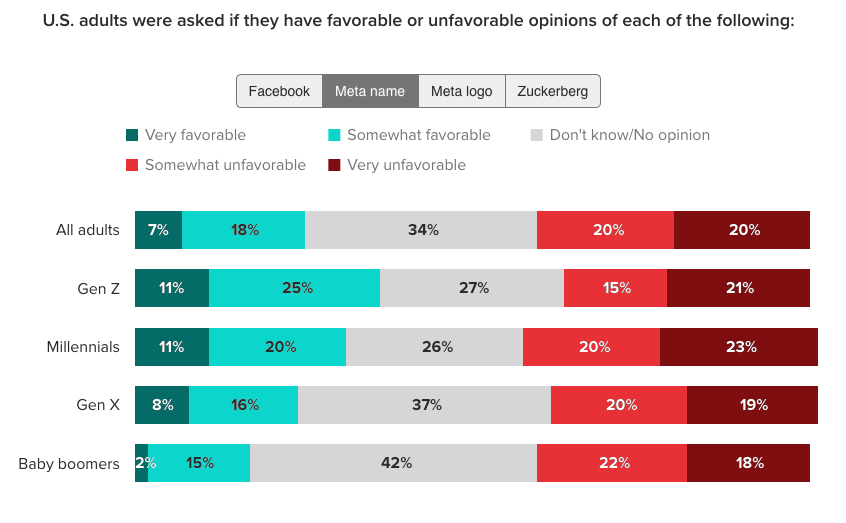 Meta Reaction: Winning the Internet shares the top links shared across 200 or so mayor newsletters. Last week four of the top five were about Meta, and the headlines give a pretty good idea of the affect: Inside the Big Facebook Leak, Leaked files show facebook is in crisis, Why facebook is rebranding, and my favorite: “Zuckerberg announces fantasy world where Facebook is not a Horrible Company”. Now tell me how you really feel.

Meta Retail: Facebook is looking to open retail stores to sell VR hardware. It is hard to understand what the VR experience really is without experiencing it. True for a lot of new categories. Retail makes sense if the economics pencil out.

Meta Work: One thesis behind VR is that when most companies are remote, VR is better than Zoom at replacing team meetings and problem solving sessions (See Facebook Horizon Workrooms). The percent of roles listed on Hacker News with remote work as an option has not slowed down. 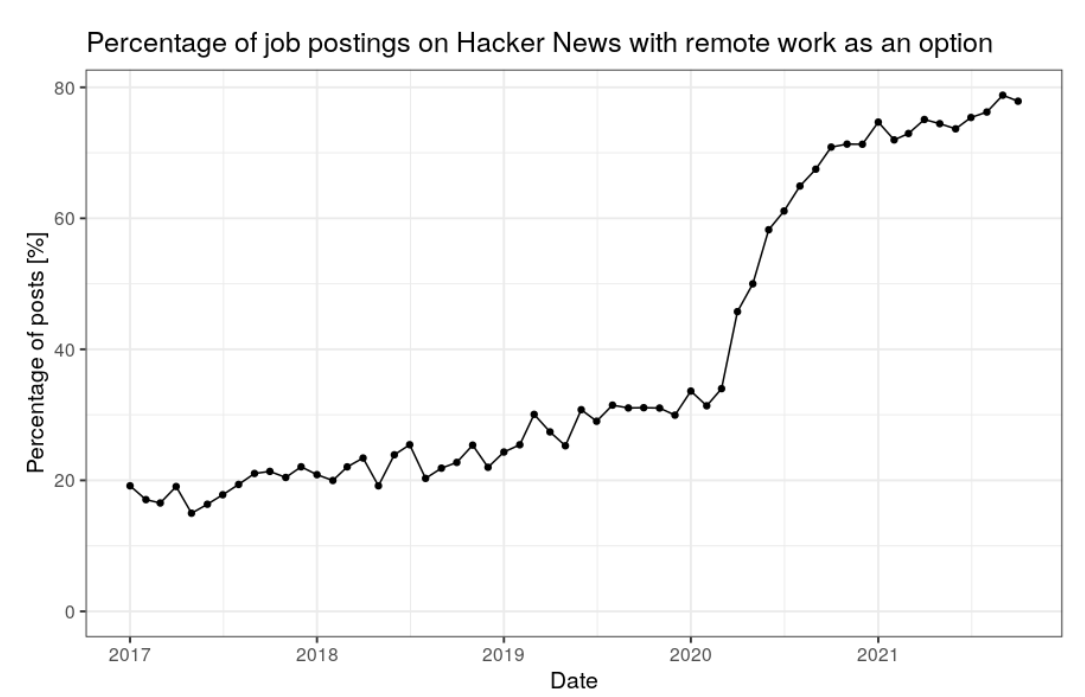 Newsfeeds: Facebook is not the only company with newsfeed challenges. Here is a profile of Netflix on the steps they took around their controversial “Cuties” film.

Zillow: The real estate aggregator is pulling out of “ibuying” houses. Relevant because this was a big bet for Zillow three years ago. It was a radical change to the company’s business model. The CEO was removed and the founder returned to build a new business. Even though it was a big bet, the logic of doing it was sound (Here was Ben Thompson’s take at the time). Even if Mark’s Metaverse bet is the right one, it is very possible in three years they end up in the same place Zillow is now.

Apple v Meta: There was a time when the tech giants saw each other as direct competitors (i.e., Amazon building search, Google launching Google+). That seemed to have changes as each has “picked a lane”. But now they are crossing over again as the giants expand into new territory - Cloud Computing now and VR/AR in the future. But the vicious battle happening right is between Facebook and Apple. Apple has hit Facebook’s mobile ad product hard (It’s hit a lot of companies hard, but the target is clearly Facebook). Facebook has tried to hit back. They put out full page ads in the NYTs, WSJ, WaPo and others criticizing Apple’s approach — which did not seem to work. In the last week they have pushed two ways: (1) They launched an option to allow content creators to sell subscriptions inside Facebook and Instagram and encouraged them to link out for payment to avoid the “Apple Tax”. This is blatantly against Apple’s rules. Mark is daring Apple to enforce the rules and risk another anti-trust investigation. (2) Instagram has been changed and now defaults to showing full previews when a link is shared on Twitter. This second strategy is interesting - it is almost as if Facebook is signaling to to other tech companies, “We are all in this together against Apple”. When everyone else is being hurt by Apple’s “privacy” changes it doesn’t make sense to “fight amongst themselves”

Reader Feedback: Last week I wrote, “"Meta has committed to investing $10 billion per year on a product category that DOES NOT YET EXIST!". Jim Lecinski, a reader nd professor of marketing at Northwestern, wrote me and argued that the metaverse category has “long existed” and gives the example of Second Life. He argues that creating the Metaverse is more product improvement than “revolution” and is more “fast follow” than true innovation and similar to Instagram Stories copying SnapChat. I agree that the Mark’s idea of a Metaverse is not that of a “clairvoyant futurist”. But I think there is a big difference between Instagram copying Snapchat (or TikTok or Clubhouse) and what Mark is doing with Meta. In the former cases the companies being copied had proven user-fit. They had built something that was driving user demand in an accelerating way. There is no equivalent for the Metaverse. Linden Labs - the company that created Second Life - is not a model to copy. They pulled out of any VR ambitions. They sold the company for a fraction of its highest valuation. And it definitely is not “trending” in any sort of way with the media. They got some buzz early on but never really found a real user use-case. Mark’s bet on Meta - right or wrong - is not “copy Second Life”. It is a much bigger gamble - “Spend tens of billions of dollars to try and find product-market fit for VR/AR”. That is what I mean by a new category - not that the category had never been tried before — arguably everything has been tried before in some lower-tech version — but the category had not yet found product-market fit. Jim gives the example of Ray Kroc taking hamburger stands (which existed) and creating McDonalds (which definitely did not). I think that is getting in the direction of what Mark is doing, but the ambition (and the investment price tag) is multiple order of power bigger.

Technology Budgets: One thesis of Meta is that it will start with Enterprise. Meta’s “Horizon Workrooms” is already a pretty good product. As the weight and performance of VR tools improves it is not unreasonable to expect more and more work-from-home employees will actually be “work from the metaverse” employees. Just as most PCs in the early days were “work computers” most VR may be “work VR”. In any case the budgets to invest in IT like this continues to increase. 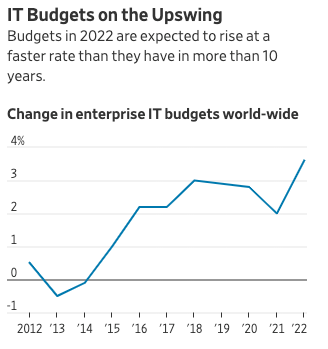 Nike/Dicks’s: The retailer and the manufacturer are merging their loyalty programs. The problem with loyalty programs is that they don’t generally generate loyalty. But COALITION loyalty programs (i.e., a program that earns and burns across different companies and categories) can be very good for customer acquisition. Unlike most developed countries, the US has never had a successful large scale coalition loyalty program. But even connecting two together like this is marginally better than not connecting them.

Other Marketing is for Employees

Allbirds: Allbirds makes “sustainable” shoes out of things like natural wool. The sustainable part is nice for PR and differentiates them from other shoe manufactures (and gets them earned media), but that is not what makes them sell lots of shoes. It turns out their shoes are just really good, comfortable and stylish. Anyway, their stock jumped 64% on its debut last week. Their filing stated: “Our focus on using sustainable materials and environmentally friendly manufacturing processes and supply chain practices may increase our cost of revenue and hinder our growth”. That is true, but I expect their savings on employee recruitment will more than compensate.

X-men/Wes Anderson: What if the distinctive director of the Royal Tenenbaums directed the X-Men (Video. About 5 years old. I can’t believe I didn’t discover this until now).