I hope everyone is having a good summer. As a reminder I am going to combine my mailing lists in the future, so do not be surprised if you get an email from MarketingBS.substack.com at some point. Same content, different email vendor.

Personal news: I have a baby coming any day now. When he arrives I plan on taking some time off, so there may be a few weeks without an issue (or potentially less extensive issues).

In the meantime, enjoy this week's issue! (be sure to watch that video at the end!)

Scarlett Johansson/Disney: Black Widow (the movie) was released into theaters and Disney+ the same day (at a $30 price point). Johansson (the actress who plays Black Widow) had a bonus clause in her contract based on box office revenue, and a promise by Disney that the film would be released exclusively in theaters. Disney unilaterally decided to pay the bonus based on total revenue from theaters plus Disney+ premium pass purchases. Johansson believed that the Disney+ revenue was less than the film would have made if it had been released only in theaters. She claims she complained to Disney, but her please were ignored and felt her only choice was to sue. Disney responded with an attack on her character (claiming she was insensitive to COVID deaths among other things). She shot back. While the drama is interesting, it is worth talking about here at Marketing BS for the PR implications. Many are saying that the bad PR will hurt Disney at the box office. Regular readers already know what I think of that hypothesis: It won’t. Future film viewers just don’t care how Johansson was treated one way or the other. Where the bad press WILL affect Disney is how Disney is perceived as an employer. And here Disney has more to lose than most companies. For a media company, employees don’t just include developers, marketers and accountants - employees also include the talent that makes the films. If top-tier actors, writers and directors are less willing to work for Disney, then the company has a real problem. Kevin Feige (head of Disney’s Marvel brand) is apparently making a fuss internally to have the company handle things differently. Maybe he understands the importance of “marketing to employees”?

Multiplier Effect: Thinkbox released a study last year claiming that TV has the highest “multiplier effect”. I believe the conclusion (Television is more impactful than basic attribution would tell you). But this type of analysis has at least three problems.

The better way to understand this is to replace “multiplier effect” with what I call “The Synergy Effect”. Synergy effect doesn’t worry about where the extra impact gets counted - it just attempts to measure the extra impact itself and attribute it to the channel that is doing the work. So if television has a 2x synergy effect it means that every attributed dollar of impact you measure from TV is actually worth $2. The extra dollar comes from some mix of the other channels, but you don’t REALLY care which ones (apart from making sure you are not over-spending on those channels. And you can do that by measuring the opposite of synergy - “Cannibalization effect” - for each of those other channels). In any case Thinkbox created a very pretty chart that is worth appreciating for its beauty. h/t Samuel Scott for making me aware of the study. 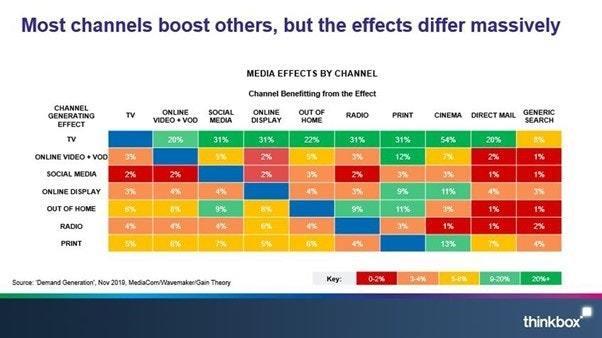 Prejudiced Ad Targeting: Scientific America has a piece on how men are disproportionately targeted for ads about STEM jobs. Unlike many companies of this nature, this is not about targeting men because men are more likely to be interested in STEM (a self-reinforcing cycle). Instead the problem here is that ads targeting women are more in demand than ads targeting men - the result is the price per impression (CPMs) are higher for women than men, and so when both sexes respond at the same rate, the algorithm will shift its focus to the men (since the cost is lower). Note that is is true not just for STEM ads, but for ALL ads. More people are willing to spend more money to get their messages in front of women, so it makes it more expensive for everyone targeting women. This is not a new problem - television shows that have disproportionate female audience tend to be more expensive as well. The difference now is we have the tools to do what we were doing before more efficiently and transparently. It is the transparency that scares some people.

NYT A/B Testing: TJCX scraped the Times to determine how the paper tests its headlines. He found that only ~29% of headlines change over time. This seems surprising. There is an argument that content-sites should not test at all (A/B tests tell you about short term engagement, not long term engagement), but if you believe in testing, then why are they not testing everything? Have editors submit a half dozen headlines for every article and then have the A/B tests tell them the “answer”. The headlines that are tested tended to be the most popular ones (A/B tested headlines were 80% more likely to be on the most popular list). This does NOT mean that tested headlines perform significantly better than the ones they chose not to test - more likely the paper is only testing headlines for their most popular articles (reverse causation). In any case, his other conclusion is that the tests tend to push headlines to become more “dramatic” than the wording originally selected by the editors. Here is Part Two of his analysis that looks at the NYTs homepage. 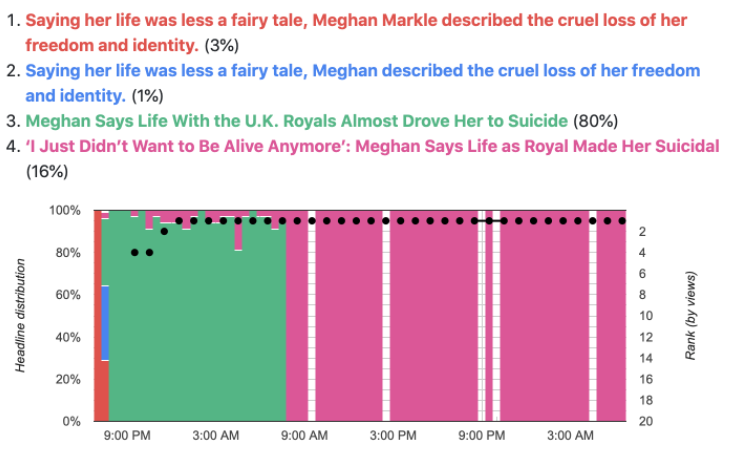 Cobra Kai: A case study on the program estimates that half of the streamers watching the show watch "little or not" traditional TV. It is getting harder and harder to use traditional TV to get full reach on most audiences. Unfortunately video alternatives to get the people who don’t watch traditional TV are very expensive. Marketing is not as easy as it used to be even five-years ago.

Hallmark: The greeting cards company now allows you to create handwritten notes on paper greeting cards virtually without having to “buy a stamp or go the mailbox”. What’s interesting here is the paper cards work because they are a signal to the receiver that you care (you spent the time and money to get and sign the card). The cards themselves are not valuable (no one buys cards for themselves), it is about the signal the card sends. So by making the process of gifting a card easier, Hallmark is reducing the power of the signal. But in this case the receiver does not know that the process was made more convenient. So as long as the offering does not get too popular, the card retains its signal power, while decreasing the signaling effort from the sender. If it ever DOES become the standard way to send a card, then it decreases the signal power of ALL cards sent (receivers will assume you sent it this way whether you did or not) so more convenience still wins.

Yelp: The local directory review site has launched “Yelp Audiences”. It is yet another an off-platform advertising platform that can target based on Yelp-data driven lookalike audiences. Targeting based on lookalike audiences is a powerful tool for any company with broad customer data. The tracking limitations that are being rolled out by Google and Apple are just going to accelerate this trend. (Prediction: Most will fail. Especially those that are trying to do it with user behavior that does not include transaction data - i.e., Yelp)

Metaverse: Last week I wrote about Mark Zuckerberg’s interview where he talked about Facebook moving from a “social media company” to a “Metaverse company”. I wasn’t the only one who jumped on the news. I came across multiple attempts to mock the company and the concept last week.

Erin Griffith (NYTs writer) mocks it with a series of funny tweets (Click to read the thread. I have not figured out how to imbed them with the curated platform. Sorry!) 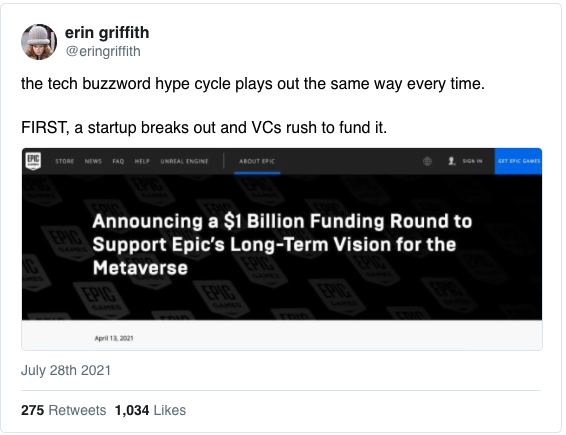 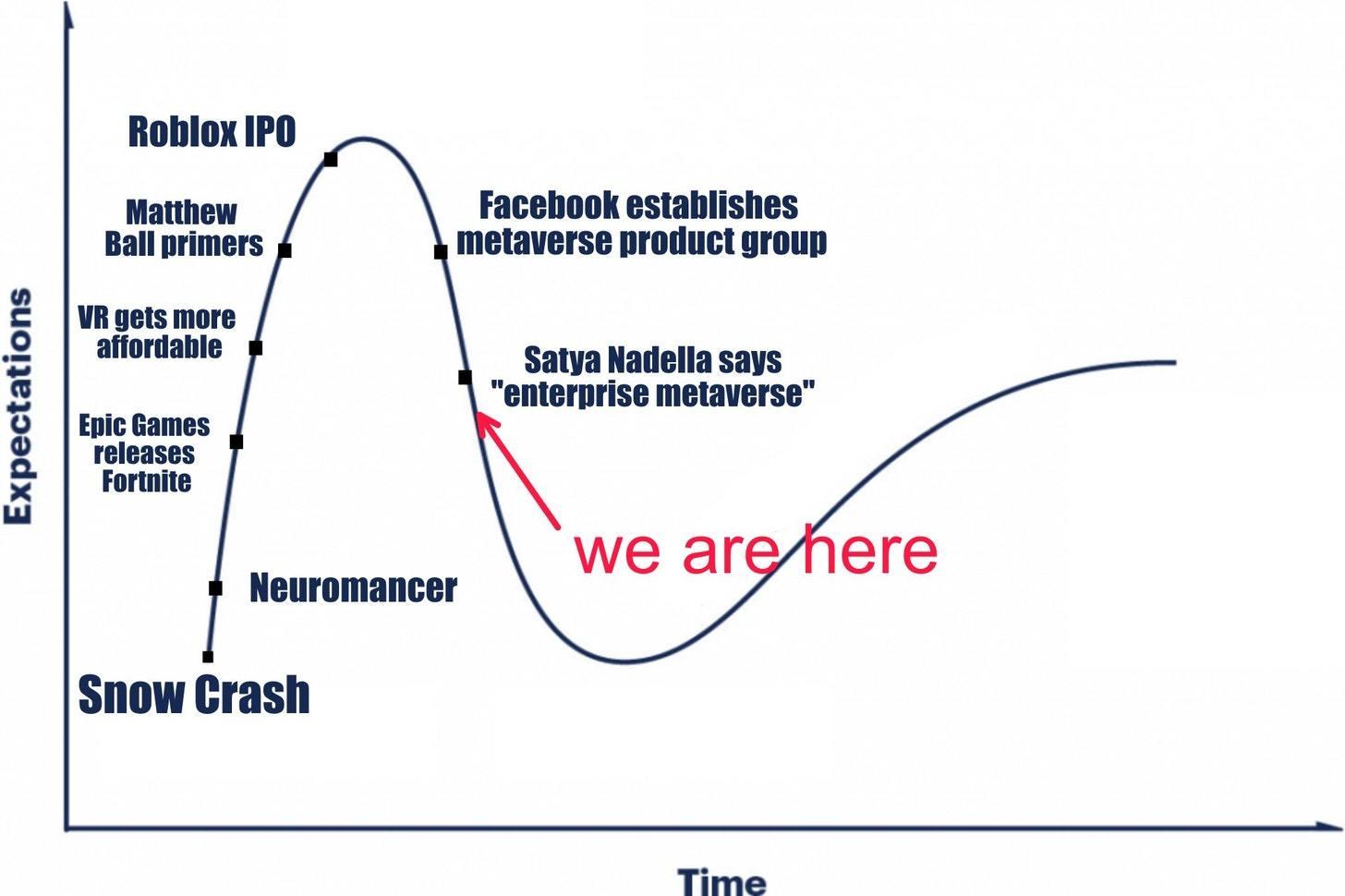 General Artificial Intelligence: As impressive as AI’s accomplishments have been, so far AI has been successful at “specific” tasks (“Narrow AI”), rather than “general intelligence” (“GAI”). Until recently the closest we have come to GAI is something like GPT-3 (or even GPT-2 - this is a good write up on the theory of why text prediction might be more meaningful to general thought than one might think). There is now another contender for early GAI. Google’s Deep Mind project created AlphaGo (which beat the world champions in Go) and AlphaZero (which can master any game it is trained on). They have now released information about “Open Ended Learning Leads to Generally Capable Agents” (Unfortunately OELLGCA does not roll off the tongue). Google’s blog post on the topic attempts to explain what they did in everyday language. The new AI was trained to “operate” in a 3-Dimensionally rendered world, and then told to play different games (capture the flag, hide-and-seek, etc). Where AlphaZero could “solve” the games by playing thousands or millions of random strategies against itself until it determined the “perfect” solution, the new AI can apply learnings from previous games into new games with new rules (as long as the games follow the same “laws of physics”). Daniel Kokotajlo at LessWrong has started a broader discussion on the implications and calls this the “GPT-1 of agent/goal-directed AGI… the proof of concept”. Hemingway wrote that bankruptcy happened two ways: “Gradually, then suddenly”. GAI may come at us the same way…

Appearance: Related to my essay on “Status and intra-elite competition”, more and more data is showing how much being “good looking” influences careers (economists in this example). This is the prejudice that no one is willing to talk about.

ChatDesk: ChatDesk replaces ChatBots with real people. It uses mobile technology to push the chat requests to a distributed workforce who are paid per message they handle. They are looking for a head of marketing. A good fit for someone who has worked in a B2B lead generation-type company (a company BUYING leads, not selling them), who wants to move into running all of marketing for the first time. Contact me if interested.

The Greatest Volley: Video worth watching 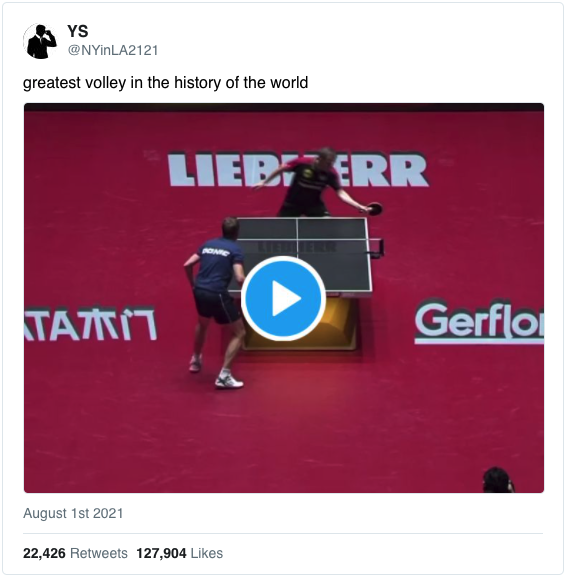 Prehistoric Animals: Cool visualizations of prehistoric animals next to their modern day equivalents (there are 37 examples, but the shark is my favorite. A Great White Shark is BIG) 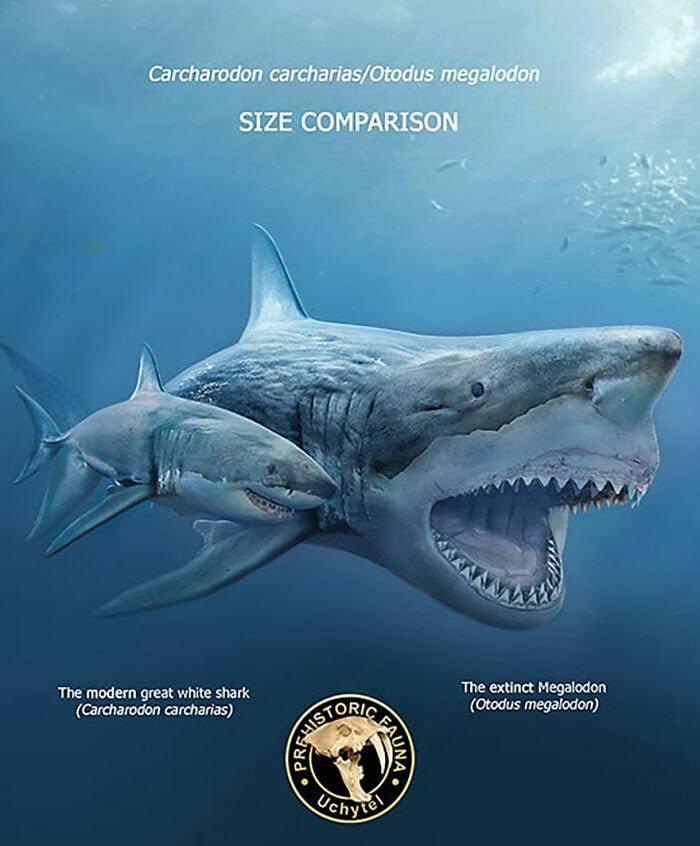 Bears: Read all the way to the end. 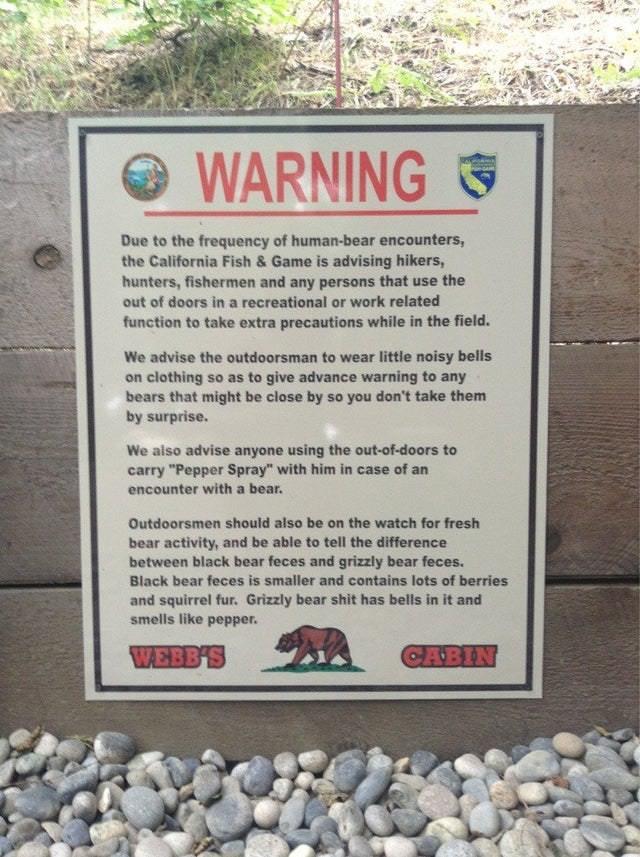 Woody Allen: “I don’t wish to obtain immortality through my works. I want to achieve immortality by not dying.”

Jake Coble: “Character is the difference between your incentives and your actions.”

Robert Henderson: “Sometimes the strongest signal is refusing to play the signaling game (which itself sends a signal. There’s no escaping signaling).”