Lots of good stuff this week. If you want to prioritize, read the Metaverse interview with Mark Zuckerberg and Matthew Ball's essays on the topic.

And this is your periodic reminder that one of these days I will consolidate my two newsletters so that you may receive this email from marketingbs and substack. Try not to be confused when that happens (also: I have a new baby coming in the next couple of weeks, so sends may be less frequent, but I will do my best!).

In the meantime, keep it simple,

Tiffanys: In January the jeweler was acquired by LVMH. The luxury goods conglomerate put in a new management team, and now they are re-branding (in a way). It is not uncommon for a new marketing executive to decide it is time to re-brand. It is almost always a bad idea (better for the executive’s career than the brand’s health). But Mark Ritson at MarketingWeek makes a good case that “this time it is different”. Rather than re-do the word mark and tag line (what many re-brands amount to), Tiffany’s is using LVMH’s “standard process” for taking an old luxury brand and “refreshing it”. They are effectively going after a new audience: 20-something women (and the men who buy for those women). Increasing the number of opportunities for purchase consideration is almost always a good choice. The market for diamond bracelets is not woman ages 40-70 with >$100K annual income: It is anyone with a wrist. 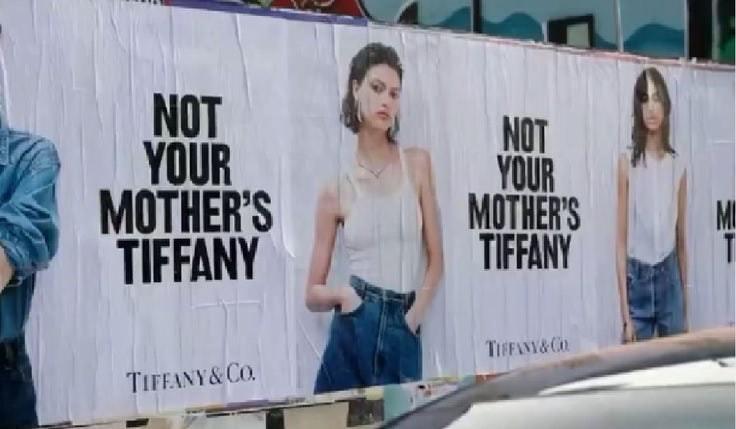 Product Placement: When I was younger I remember asking who paid who when a character in a movie drank a bottle of Coke (Answer: It is Coke that pays to be in the movie, not the other way around). As fewer and fewer high-income consumers are consuming traditional video advertisements, being “part of the content” is becoming more and more popular. Bloomberg estimates that product placement revenue is expected to be $23.3 billion in 2021 - up 13.8% YoY (and growing more than 2x as fast as overall marketing spend. That is still a small number (by itself Google’s quarterly revenue is more than twice that), but companies like BEN are attempting to standardize and “productize” the marketing channel by doing things like green-screening products in movies to be digitally added later (i.e., the character eats cereal, but which cereal will be decided after filming through a product placement auction of interested cereal companies). Related: Zack Stentz (screenwriter Thor, X-Men: First Class, Camp Cretaceous and others) is looking for a middle eastern airline to sponsor his latest movie (product placement + shilling by the cast in exchange for free transportation). If you can help, please let me know and I can put you in touch with him.

Tik Tok: The WSJ tried to reverse engineer the Tik Tok algorithm. If you ignore the moralizing, their interesting finding is that it is almost entirely driven by if you watch and how long you watch the videos it shows you. If you only watch depressing videos, the algorithm figures that out and only shows you depressing videos. The point is that as “secret” as these algorithms are, 98% of their power comes from very simple concepts. Tik Tok’s power comes from scale rather than some sort of secret sauce.

I want to be clear about what the paper doesn't say.

(1) Paper doesn't say advertising can never be profitable. For most brands, there is a place on our estimated ad response curve that would be positive total ROI. It's just that most brands in our sample advertise far beyond that point.

(2) The paper doesn't say that advertising has precisely 0 effect on every individual who watches an ad. It says that the aggregate effect is typically sufficiently small that it is (statistically) clear that most firms are advertising too much given cost

(3) The paper also doesn't say that advertising can't be improved with better ad copy, better scheduling or better measurement practices. We don't evaluate advertising strategies that are far outside the support of the data.

(4) Finally, if your brand advertises for reasons other than creating product sales (e.g., recruiting talented labor, signaling solvency to investors, etc), our estimates can't really help you evaluate the returns on those margins.”

My summary: On average brands that are advertising on television are advertising too much given the channels effectiveness. But even this conclusion is limited by the time period the study looked at (i.e., ignoring long term effects), and the impact on things beyond sales - “marketing to employees” but also things like long term price sensitivity of the customer base (which is the most important impact of brand advertising) 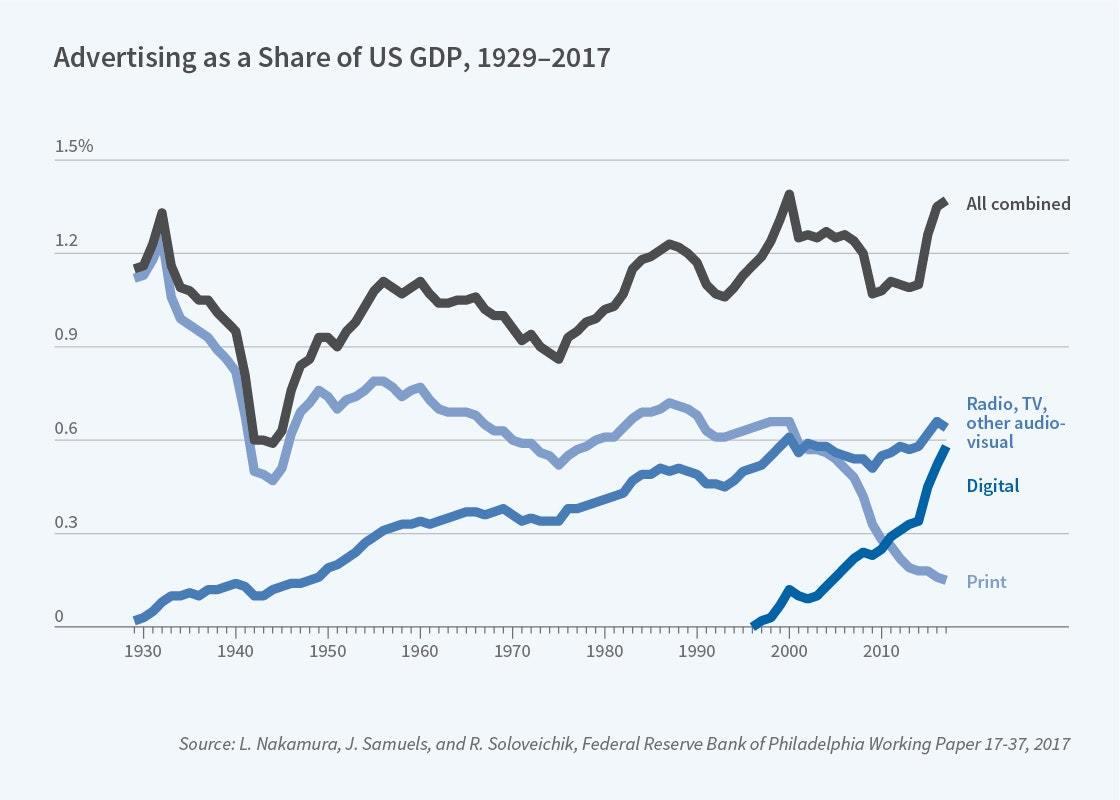 Book Publishers: Conservative books are big money makers for publishers, but they are generally not very appealing to the (very left-wing) employees at the publications houses. Slate has a good article on how publishers handle the conflict (generally by creating special “conservative imprints” to publish the books at arms length from the rest of the employee base)

Substack: While Substack has offered podcast capabilities (it is how I host this newsletter, the Marketing BS podcast and the SuperSerious616 podcast), it was not a core strength. But if you wanted to create a podcast that monetized through subscriptions it was the only real choice for a while. But in the last year Spotify and Apple have both launched turn-key solutions for building a subscription-driven audio shows (while everyone else from Twitter to Facebook are offering subscription-driven newsletters). As befits a venture-backed organization, Substack is doubling down on their podcast capabilities and offering funding to a few high profile individuals to build on their platform. Every tech company seems to be both a monopoly, and in intense competition with the others at the same time. Related: Tumblr is offering paid-subscriptions now as well.

The Metaverse: Casey Newton has a fantastic interview with Mark Zuckerberg about Facebook’s ambitions to build a Metaverse (Perhaps most popularized by the novel Ready Player One). Yesterday Andrew Bosworth (VP AR/IR) announced the creation of a “Metaverse” product group within his organization. It would not be the first time science fiction inspires future technology. If history repeats itself, I expect whatever multiverse happens, it will be inspired by the novel, but look very different. For more on what it could look like your best primer is Matthew Ball (who Mark mentions reading in the interview). Something like this is coming, so reading this stuff is a good investment (but just remember everything happens slower than you might think).

Casper: Direct-to-Consumer can be really powerful if you can make the economics work. But eventually you hit diminishing returns and you need to find new marketing channels. OR you can drive sales by increasing distribution. Casper is now in Bed Bath and Beyond. D2C B2C becomes B2B2C and companies like DollarShaveClub look more and more like small versions of Gillette every day.

Incentives in Medicine: I am reading The Emperor of All Maladies (a “biography” of cancer). In Chapter 24 it talks about the incentive problem for trying to prove a negative. To prove something you need a large enough trial. A large trial requires doctors to participate. This is fine if you are trying to prove something the doctors think will work and ties to their beliefs, but what if you are trying to prove something doesn’t work"? It is a lot harder to get practitioners to sign-up to your trial, when, if the trial is successful, it will show what the doctor us doing is wrong. Why would a doctor participate in the trial? The example he uses in the book was researchers trying to prove that radical breast surgeries after a breast cancer diagnosis were not actually required (i.e., “Could you get similar effects by much less radical surgeries”). The researcher had a very hard time trying to get ANY surgeons to participate in a trial that that was trying to reduce surgeries. How this relates to marketing is left as an exercise for the reader. :) 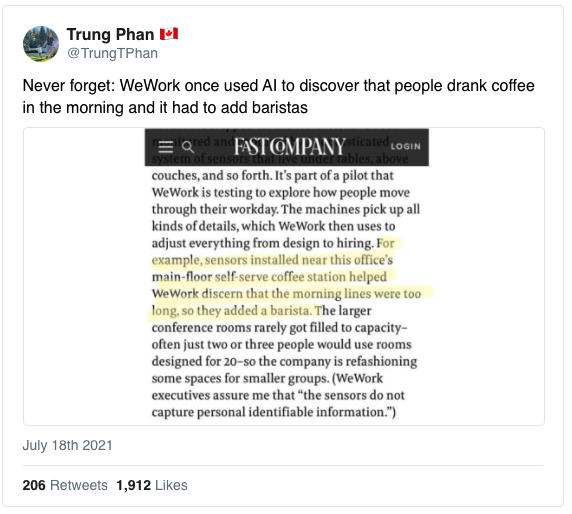 COVID and the New World Order:

The Return to Normalcy Index: Available by country and by category and updated daily. Published by the Economist. Here is the USA overall (still at 80% normal as of yesterday). (Hong Kong is the only country over 100 right now):

Winning the Lottery: It is a common refrain in business when talking about resiliency of “How have you built your team to prosper if you, or someone on your team, wins the lottery tomorrow and quits their job?” (The more grisly version replaces lottery with “gets hit by a bus”). Some researchers at the University of Chicago looked into what actually happens when people win the lottery (or in academic jargon, “How Americans Respond to Idiosyncratic and Exogenous Changes in Household Wealth and Unearned Income”). They found that ever $1 in lottery winnings results in a reduction in earned income of 50-cents and an increase in consumption of 60-cents (a 10-cent reduction in taxes makes up the difference). So people on average don’t quit working when they win the lottery, but they do move from full-time to half-time labor…

Mark Andreesen: "The problem with network effects is they unwind just as fast. And so they’re great while they last, but when they reverse, they reverse viciously. Go ask the MySpace guys how their network effect is going."